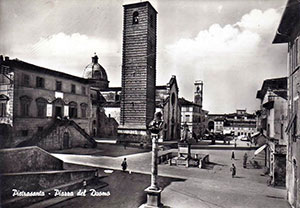 The town of Pietrasanta, in Versilia, was and actually is the center of the processing of marble and bronze of international importance, the crossroads of sculptors from all over the world. Thanks to an old town full of well cared monuments, the town with a lot of galleries and large seasonal exhibits in Piazza del Duomo and in the Church of St. Augustine.
Versilia offers a variety of holidays: to the sea, to the first hill, to the mountains. The Apuan Alps are an attraction because there are many paths and refuges scattered around the mountain range; it is possible to organize excursions, tours and / or guided visits, also in the Antro del Corchia, a ancient cavern with approximately 53 km of tunnels and shafts, it holds the national record for the largest cavern underground.
There is also the opportunity to visit other destinations thanks to the proximity of Versilia to the port of Genoa and / or to Airport of Pisa and Livorno .Few miles faraway you can reach the beautiful art cities like Lucca, Pisa, Florence, Siena and the famous Chianti hills, too.

Originally Versilia, previously called Fosse Papiriane, covers an area of approximately 160 square kilometers in the coastal belt of north-western Tuscany. From the administrative point of view it takes part of the province of Lucca. The municipality of Camaiore, Seravezza, Forte dei Marmi, Pietrasanta and the subsequent addition of Camaiore, are considered precisely the " Historical Versilia ". Pietrasanta was born in the thirteenth century, when the mayor of Lucca, after having destroyed the castles of Corvaia Vallecchia and took refuge with the army over the fortress overlooking the town. Under the rule of Castruccio Castracani Pietrasanta saw a great development so that the same in 1324 built the castle and the cathedral. After the death of Castracane and a fire in the city, the power came back into the hands of Lucca and then it went to the Florentines in 1484.
The Florentine government did not last much and the power came into the hands of Lucca.

With Michelangelo Buonarroti Versilia had the opening of the first marble quarries that brought the city a remarkable economic development. In 1700 Pietro Leopoldo contributed significantly to the development of the city by improving reclamation and encouraging the construction of hotels and houses. In 1799, however, with the advent of the French economic development, it suffered a setback and then it raised again after the fall of the Napoleonic empire. From this moment on, Pietrasanta met only moments of success, so in 1842 was opened the school for artistic work of marble, which is currently active but it changed its name. The district magistrate's remained intact even after the unification of Italy. Already from the name we can understand that Forte dei Marmi shows a strong relationship between the marble quarries of the Apuan Alps (Alpi Apuane) and the sea. The first building was the " Forte dei Marmi ", commissioned by Cosimo de 'Medici”. Around this, it was built in a short time a small village of fishermen and sailors. 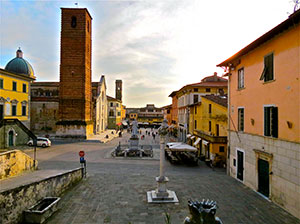 From that moment the development of this small town began and slowly it became important not only for its shipbuilding activities but also for its inhabitants. Around 1800 Forte dei Marmi became one of the favorite destinations for holidays of the high class and nobility. With the birth of the first beach resort and the autonomy of the Commune in 1914, the city reached its peak: the rich families built their villas in the pine forest of Roma Imperiale, a very beautiful neighborhood of the town.